Duet: Our Journey in Song with the Northern Mockingbird 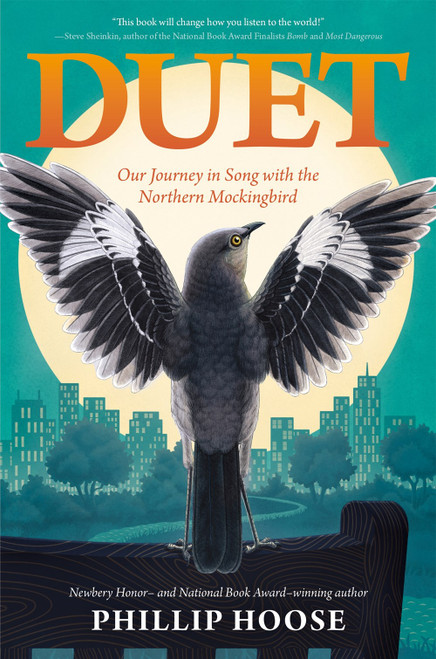 Duet: Our Journey in Song with the Northern Mockingbird

This is the story of this little-known partnership between humans and mockingbirds. It is a case study in courage, resiliency, and the power of song.

Over the past fifty years, North America has seen its bird population decline by fifty percent, according to some estimates. Yet in spite of exploitation, near-extinction, and a changing climate, the Northern mockingbird has survived—singing its distinct songs through it all. What has allowed this species to stand trial after trial? The answer lies in the remarkable alliance this bird has formed with humanity: the mockingbird has adapted uniquely to our evolution, our developments, our worst mistakes, our highest art. In the meantime, the Mockingbird has become a cultural touchstone and a scientific marvel.

Phillip Hoose worked for the Nature Conservancy for over thirty years and is an acclaimed author and a birder.

Hardcover for ages 12 to adult.

Nature's Treasures: Tales of more than 100 extraordinary objects from nature

100 Questions About Birds and all the answers, too!

Pocket Guide to Pigeon Watching: Getting to Know the World's Most Misunderstood Bird